By AnnFri 5 Feb 2021Publications
No Comments 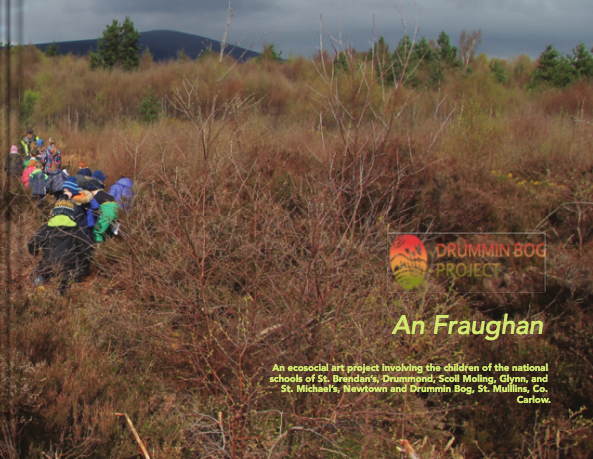 An Fraughan Drummin Bog Project
This ebook has come from the An Fraughan ecosocial art wetlands project, which was the collaboration between South Carlow artists and the three primary schools adjacent to Drummin Bog. It is a visual snapshot of the young people’s time on the project and their engagement with the bog and their creative outputs, while also illustrating Drummin Bog itself.

Based on Drummin Bog (County Carlow’s only raised bog and the last remaining in the South-East of Ireland), instigated and led by artist Jules Michael, and funded by Creative Ireland 2018/2019, with the support of Carlow Arts Office, An Fraughan depended upon ecosocial art practices because it connected a very special Carlow environment with its surrounding community through inclusive, participatory arts activities.

The Drummin Bog Project is a voluntary not-for-profit community education project to restore the only raised bog in Co. Carlow. Situated in the South East of Ireland, close to the River Barrow and the historical site of St. Mullins, the Drummin Bog Project was formed in 2015 to restore and preserve this unique natural heritage. You can find out further information about the project on its website at www.drumminbog.com.

To read this ebook, please click on the button below: