Green European Foundation, with the support of Green Foundation Ireland, invite you to The Point Festival / Carnsore Summer School from Friday 7th to Sunday 9th September 2012.

Carnsore Point – location of the famous festivals of the late 1970s and early 80s, which were instrumental in halting the then Government’s plans to build a nuclear power station at that site – is arguably the birthplace of the Irish environmental movement.

Seeking to invoke once again that spirit of people-power, the Summer School will devote the weekend to discussing ‘Climate Change: Myth and Reality’.

Unique to this School will be its festival and child-friendly atmosphere, incorporating music and comedy performances, a film premiere and activities designed to stimulate body, mind and soul.

It promises to be an exciting weekend. All are welcome! 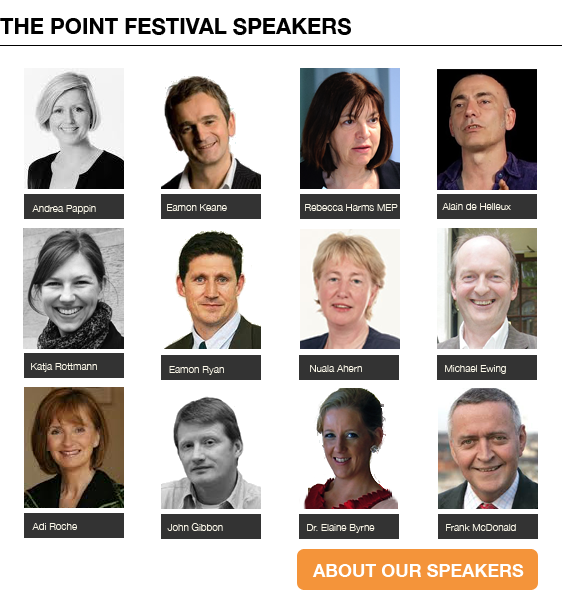 PROGRAMME OF EVENTS (updated on 5 September 2012)

10:00am to 10:30am / AARHUS FOR BEGINNERS – Empowering individuals,
communities and institutions through the application of the Aarhus Convention.
A short but informative talk on the recently ratified Aarhus Convention, the ongoing legal
challenge of the EPA’s consent to grow GM potatoes in Ireland and its ramifications in
Ireland. A must for all those interested in people power and the environment.

1:00pm to 3:00pm / WORKSHOP: Effective Responses to Populism.
Given by: Elizabeth Drury (Eye to Eye Insights).

8:30pm / LEVIATHAN POLITICAL CABARET
Leviathan is delighted to present a very special edition hosted by publisher, broadcaster
and Dragon’s Den panellist, Norah Casey on Good versus Bad Journalism in the Internet
Age.
The panel will include Harry Browne (lecturer in journalism at Dublin Institute of
Technology); Carol Hunt (The Sunday Independent); John Ryan (Broadsheet.ie); Tom
Mooney (editor of the Echo group of newspapers), as well as a multi-media presentation
from resident musical satirist, Paddy Cullivan and a short film from the Doris/Magee
team.

Followed by SESSION – Music performed by: The Submersibles.

10:30am to 11:15am / REFLECTIONS ON JOHN MORIARTY
Introduced by: Brendan O’Donoghue.

Ball games and Board games on site

FRIDAY NIGHT
Welcome meeting and getting to know each other in the Dining Room.